Opportunities to participate in our research group and contribute to research on applicative quantum science.

If you are looking for a Bachelor, Master, or PhD position, please have a look at the different research topics we are offering at the moment.

In cooperation with the Qnami AG, Switzerland we can offer a
PhD position in Quantum Sensing (m/w/d)

The task of the project would be to perform some NMR pulsed protocols. Benchmark all-optical readout of the nuclear spin ensemble. Develop new NMR protocols for sensing.

A good candidate should be motivated to work in collaboration with Engineering department on modern CMOS EPR-on-chip platforms. A strong programming skill as well as background of spin physics (EPR, NMR) is required.

In this theory/simulation project you will employ Machine Learning algorithms (Supervised, Unsupervised) on data obtained from Quantum sensing experiments. You will develop a training model to recognize field-patterns and learn features on ODMR and spin life-time measurement data obtained from various experiments. Further these training models will be used to make new predictions on the analyzed data. You will use the standard classical ML algorithms and also develop parametrized quantum circuits and optimize them to suit a particular use-case (for example performing a classification on a dataset).

Bringing the QISKIT into the diamond quantum computing

A good candidate is familiar with programming with python and quantum mechanics as well as QISKIT environment.

A good candidate is familiar with programming with python and quantum mechanics as well as QISKIT environment.

A good candidate is familiar with programming with python or schema programming language. CUDA GPU experience is appreciated.

Quantum computing using qubits is a well-established paradigm. An alternative using d-level systems (Qudits) is known, but a systematic approach to realize Quantum computing (QC) and Information is still unclear. In this project, you will establish Qudit QC that use the well-controlled four-level systems realized through spin defects in Silicon Carbide (SiC). You will design optimal one- and two-qubit gates, and their randomized benchmarking in the presence of errors. Further, you will show how these higher dimensional systems can lead to increased quantum volumes for QC, not known before.

Lithium niobate is an electro-optic material whose refractive index changes upon application of an external electric field. At the same time, it can be produced in a form of thin film and subsequently shaped into on-chip photonic elements. These elements can be manipulated by electrically routing light within the photonic circuits of arbitrary complexity. Lithium niobate can also be activated with rare-earth ion by ion implantation to serve as a source of single photons and, at the same time, to serve as a quantum memory thanks to their electron and nuclear spins. Our particular interest is 171Yb isotope. Its hyperfine structure in lithium niobate is vaguely known. The main point of the proposed bachelor project is to reveal the hyperfine splittings of the ground and of the excited optical states by means of optical hole-burning and optically detected magnetic resonance techniques. 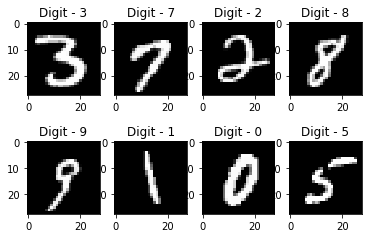 Handwritten character recognition is an ongoing field of research encompassing artificial intelligence, computer vision and pattern recognition. The simplest algorithm consists of a 4 layered neural network, which allows to recognize digits from 0 to 9.

In the framework of this project, we will construct the hybrid neural network with 4 qubits (preliminary number) to be able to recognize 10 digits (from 0 to 9).

What you will learn in this project:

The sensitivity of diamond-based magnetometers allows the measurement of extremely weak magnetic fields originating from the human brain, i.e. brain waves. The brain waves have multiple frequency components, which we want to resolve. Current measurement schemes allow to detect only their total effect. In the framework of this project, we will design pulse sequences that will allow to decompose the signal into its frequency components.

What you will learn in this project:

Modern quantum information processing relies on fast and precise control of quantum bits. Algorithms require the fidelity of each operation to exceed 99% and indeed scalable quantum computers require even larger numbers. Achieving such high precision requires sophisticated quantum control. In the thesis we will apply quantum optimal control algorithms to single quantum bits. This numerical method achieves high gate fidelities by optimizing quantum control under a predefined stet of boundary conditions. We will install these algorithms on new ultrafast hardware with the goal to attain increased precision in quantum error correction. The achieved gain in fidelity will be experimentally tested and the developed software will be integrated into an existing software package.

The aim would be to demonstrate the minimal model of a quantum heat machine (for both quantum heat engines and refrigerators) made of a single driven two-level NV qubit simultaneously coupled to spectrally distinct hot and cold baths. The dependence of the quantum refrigerator cooling rate and efficiency on the bath spectra and modulation rate of the coupling between the qubit and the baths will be analysed both theoretically and experimentally. For experiments two spin-baths made of 13C nuclear spins will be used to demonstrate the working principle of the Quantum Refrigerator.

The aim here would be to use quantum control theory to design methods to sense the dynamics of strongly interacting many-spin systems, which include 2D spin models, Skyrmions, spin-Maser etc. Using both analytical and computational methods, you will produce a library of pulse sequences with targeted functionality in sensing interacting spin systems. Further, (as time permits) you will use these results to design a sequence for detecting thermalization in closed systems using a quantum sensor.

The proposed master project is aiming at optical detection of a single divalent europium ion in various hosts. While some of the host materials, such as CaF2, are readily available as single crystals, the most interesting having no intrinsic nuclear spins ones can be obtained primarily as micro- and nano-powders. If the detection of Eu2+ ion is achieved at early stage of the project, the focus of the work will be shifted on studying electron and nuclear spin properties of the potential europium qubit.

The project will involve many aspects of materials science and optical characterization in confocal microscopes. It also implies close collaboration with material science groups at Max-Planck Institute as well as with implantation groups in Bochum, Augsburg, and Leipzig.

To the top of the page